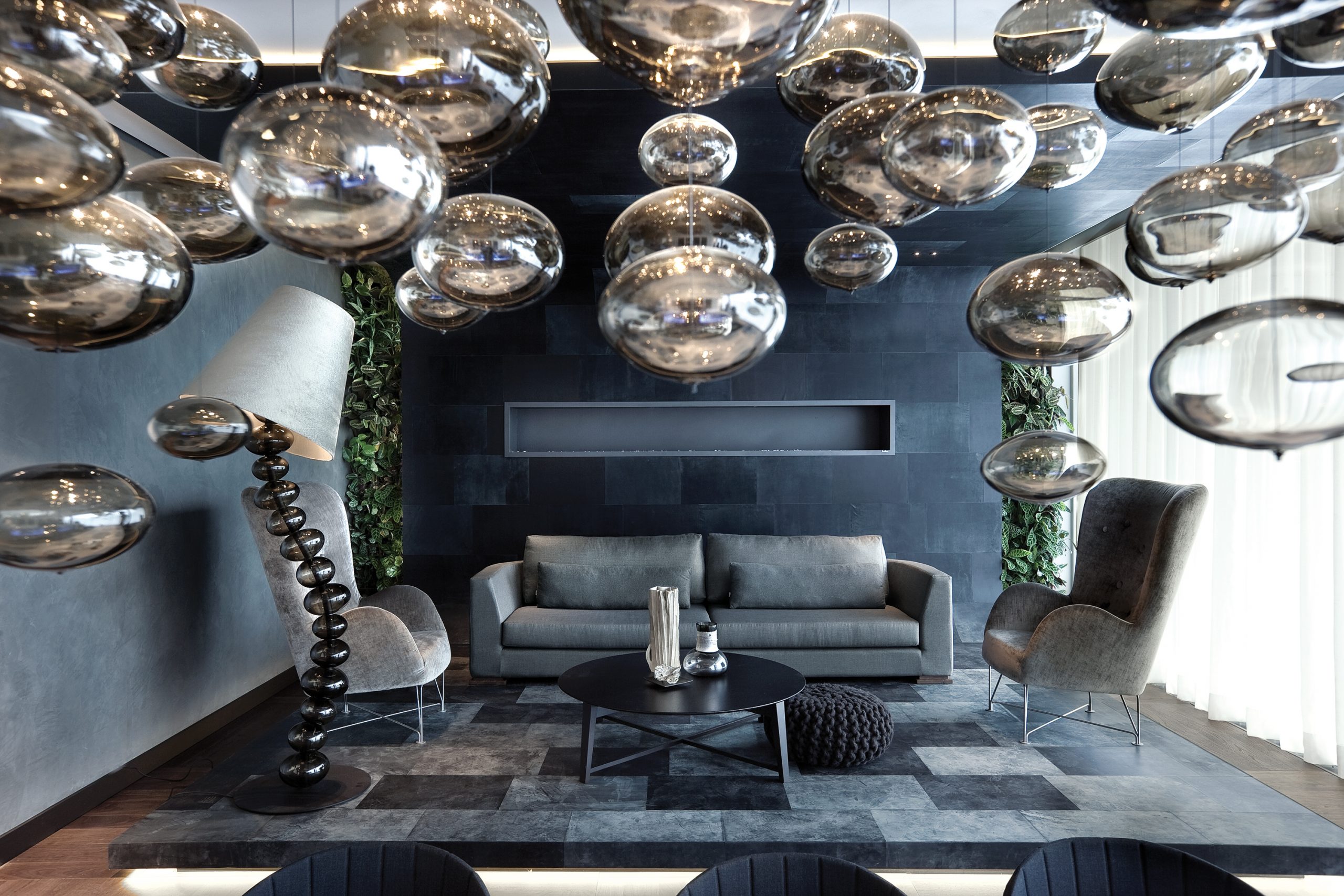 Eco-Chic, according to Robert Kolenik, in the show interior he designed as an apartment at the headquarters of the Dutch lighting specialists, Maretti. All the interior ‘ingredients’ were designed by Kolenik, many of which from recycled materials

Eco-Chic in the Dutch Polder

“My world revolves around eco-chic: the balance between sustainability and a wealth of homely atmosphere. It’s a ‘liveable’ world in terms of comfort and functionality. It’s a world of sustainability too, the challenge being, how to manage that aspect in the least obvious way.”

The Dutch interior designer Robert Kolenik demonstrates what this entails in his show interior at the premises of Maretti, the lighting specialists, in a big polder in the Netherlands.

The interior created by Robert Kolenik, with lighting fixtures he designed for Maretti, resembles a modern apartment. He describes it as minimalist, but that refers to the fact that he only works with a handful of elements – in his opinion, it’s always homely. On one side there is the sitting area, which is arranged on a low platform; the kitchen is located on the other side, over the whole breadth of the space. A striking feature is a large aquarium integrated into the kitchen island. There is a roomy working surface/dining table in the middle of the kitchen with a veritable solar system of glass spheres above – a lighting composition designed by Kolenik himself.

He demonstrates the eco aspect by way of a sofa he designed. “It’s based on eco board, a material made from agricultural residues, which are bonded together with natural resin. So, no wood is involved, the foam we use is based on soya and the down is from ‘happy’ chickens. A positive spin-off of this construction is that it has a negative carbon footprint”, as the designer explained.

Kolenik: Designing for a better future

The Dutchman Kolenik discovered his passion for interior design by chance. Having completed his studies in economics, he went to work for his father who had an ‘odd job’ business doing up interiors. After his father died unexpectedly, he decided to continue the business, but with a different approach. He updated the name and the logo, and somewhat recklessly plunged into building interiors, as well as addressing the preceding design stage. It paid off, and in 2008 he decided to close the odd job business and focus on design, in his studio in Amsterdam. He wanted to work with a small team to put his ideas into effect, deriving great enjoyment from the freedom of managing his own business.

His eco-enthusiasm meanwhile extends to an additional pursuit, which is no less labour intensive: The Whale Tale project. It is an initiative to bring the problem of the vast mountain of plastic floating in the oceans to the notice of children. Ten schools at the Dutch coast comb the beaches for plastic, collecting and sorting it. The five usable types of plastic are turned into granules, which are used in furniture and interior accessories. His aim is to increase the awareness of young people about the growing mountain of waste and the random use of plastics.

“Admittedly it’s a huge task to organise it all. And a huge investment which must be recouped with items that can be mass-produced”,